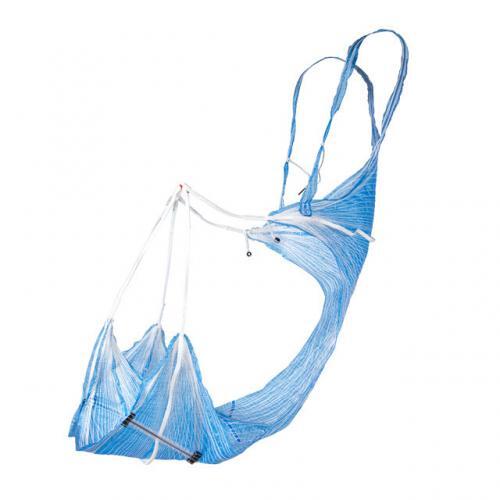 The F*Lite was born out of a simple idea: design the lightest possible paragliding harness. To achieve this, a unique and carefully calculated Dyneema structure reinforces the sailcloth seat for a total weight of only 102.1 grams in the M size.

The F*Lite is designed specifically for the most serious hike & fly pilots and para-alpinists. It is EN load tested to 100kg.

During more than a year of development, the OZONE R&D Team have worked hard to make this harness not only incredibly light, but also comfortable in flight.

Carbon compression bars help to support the pilot’s legs, and the Dyneema thread pattern is far from random. The complex web was developed based on an algorithm which determines stress patterns in the harness. The pattern was specifically designed to cover areas of increased load.

The overall Dyneema fiber structure has been designed by the superposition of individual networks. Each network was designed and dimensioned especially for a specific kind of stress/load.

In the animation, you can see the details of the Dyneema fiber networks in an exploded view. Each color is an individual network.

The major networks are the Yellow for leg support and Green for the back support. They carry most of the pilot weight load during straight flight. During the takeoff and landing phase, they give the load to the Pink and White networks.