Feel connected like a 2-line race machine, with rear riser steering on crafted control toggles, but maintain the security and comfortable workload of an EN C glider. An optimised line configuration and unique risers enable a three-line layout in the centre of the span and a two-line layout at the tips. The resulting reduction in drag increases performance noticeably.

Careful attention in the design phase has led to exceptional thermic handling bringing the composure of 2-liners to the EN C class. The tension across the span produces a more composed glider and maintains energy in the turn that enables the Fusion to carve through the sky. Surf effortlessly to cloud base and then race away efficiently on bar.

A pitch stable aerofoil, less prone to collapses and oscillations, enables the pilot to concentrate on conditions and decision making with a mind freed from micromanaging the glider. The modest aspect ratio and cell count mean a comfortable level of workload as expected for an EN C glider. The shark nose profile, 3D panel shaping and detailed internal structure combine to produce a modern sports class wing.

At speed, the Fusion risers allow the pilot to fly the glider by changing the angle of attack whilst not distorting the profile. The two-liner style risers allow the Fusion to cut through the turbulence more efficiently so that the pilot can enjoy more accessible performance throughout the speed range.

“I wanted to bring the performance of our highly successful two-line projects, the XCRacer and Spectra, to the EN C class. This Fusion has produced an accessible package that is a dream to fly and one of the most pleasant gliders I’ve ever flown.”
Felipe Rezende (Flow Designer).

Strategically placed plastic rods of different stiffness and thickeners to give optimum rigidity to the canopy.

The Fusion was designed in a way where every cell is aligned to true airflow so there is less disturbance by the inherent billowing effect found on paragliders.

The canopy twist and washout on the wingtips further reduce drag and improve the lift coefficients and aerodynamics on the Fusion.

Our solid shark nose profile is a pitch stable airfoil which means:

Each cell and diagonals were structurally dimensioned and thoroughly computer analyzed to offer the most suitable chord and span-wise sail tension.

The result is a canopy with less attachment points but more taught and rigid offering just enough flex characteristics to give the ideal feedback.

A well-tensioned sail is especially important at higher speeds to improve solidity and resistance against collapses. 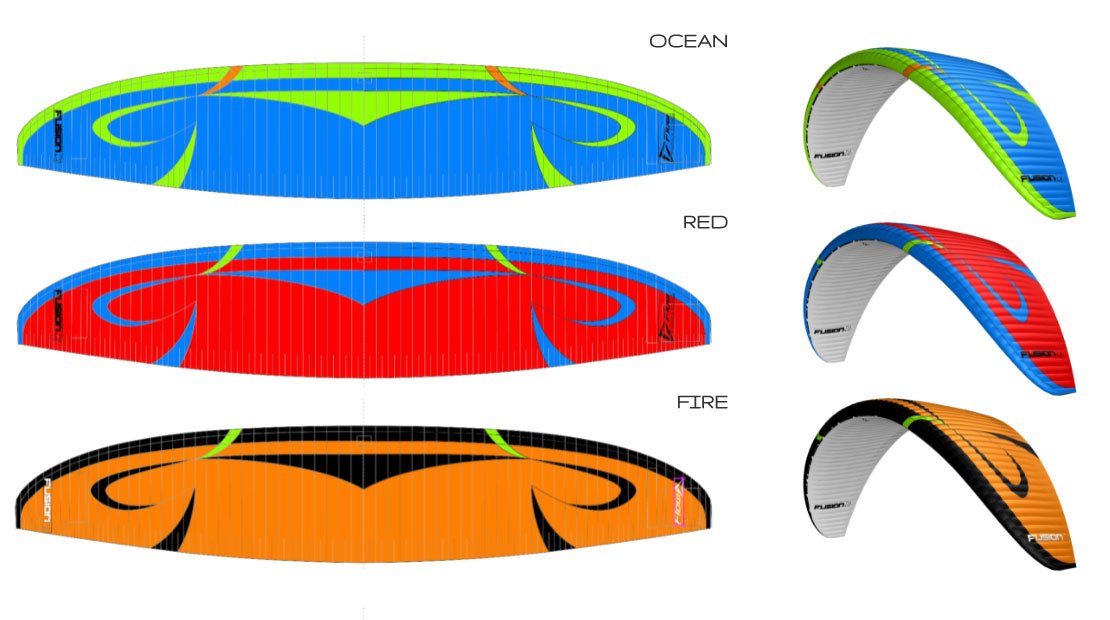