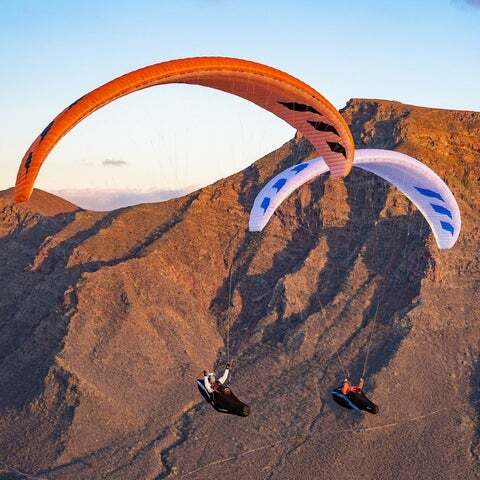 The PHI ALLEGRO X-alps has got the genes and thereby the speed and performance of the ALLEGRO, indeed. Furthermore, it has reduced rigging (2 main lines) and a reduced internal structure to minimize weight. In combination with the new riser (R07), it is offering a “game-changing” flying experience.

PHI Allegro X-alps Designer’s Note
The ALLEGRO X-alps has been completely recalculated and redesigned on the base of the ALLEGRO. There are some differences in rigging, ballooning, wing curve and wing statics. The result is an extraordinary superlight C wing. Additionally, we all are very pleased with the new semi-light riser R07. Only with these risers, it is possible to experience the full potential of this wing: the most optimal combination.
Hannes Papesh

PHI Allegro X-alps technical Features
Although the ALLEGRO X-alps is based on the ALLEGRO, it is not just the same wing in light cloth. During plenty of development stages, the internal structure has been optimized towards the goal to have a rigid and ultralight wing. The most obvious difference is the fact, that the ALLEGRO X-alps has only 2 main lines in the wingspan direction (versus 3 in the ALLEGRO). The base behaviour of the ALLEGRO X-alps, however, is similar to that of his heavier brother: both are very fast and show an impressive performance especially in speed. Because of the lighter canopy, the ALLEGRO X-alps is a little more “communicative” in thermals and softer in extreme manoeuvres. The combination of the ALLEGRO X-alps and the new R07 riser with a unique ergonomic C handle position is offering a new flying sensation. The test pilots were excited: now it’s on you to try!

Feedback
I had a chance to fly both the Allegro and the A-XAlps in Manilla for several days. Both are amazing wings. After my first flight on the XAlps in Canungra, I thought it was more wiggly than the full-fat version. But after flying it some more, it seems more solid. Maybe a touch wigglier. I think that it was just very gusty on the first flight which made it seem snakier because the tips were surging forward in the gusts. In the SoO comp, there were several occasions where I flew with D and C wings. Omega XAlp, XCRacer, Ozone Delta 4s, 777 Queen, Queen Light, Alpina 4, Sigma 11 etc. The conditions were very light and the XAlps did very well against these wings in these conditions. One big advantage against the D wings was that I could turn inside them and regularly out climbed them. I cranked hard in the thermals while keeping the flying speed low to stay in narrow thermals and there was never a hint of a spin. On the bar, the wing is solid and the R7 risers are so smooth and the pressure is just right. In wide, light thermals you can stay on the risers to turn if you like. The handles are an extra thing for lines to get snagged when setting up but the additional attention is a small cost to pay. On bar against a Queen Light, racing to a climb ahead, the A-XAlps pulled away quite distinctly but without comms with the other pilot I don’t know how much bar he was using. Like all light Phi wings, the A-XAlps is dead simple to launch. It levitates in the air while inflating, needing a bit more work than the Maestro XAlps to keep it floating while in the air (seems to wind-vane a bit more) but it’s easy to keep under control and will make you look like a pro when everyone else is messing up their launches Overall very happy with the A-XAlps. A proper XC machine that is also a LOT of fun when ridge soaring and swooping launches. (Hammed Malik)

I had an amazing flight on the Allegro from Widgee to Gayndah recently. 115km and could’ve kept going if it wasn’t so late in the day. The Allegro is great at sniffing out the lift and pulling you into it. Amazing efficiency allows cutting into a strong wind and the glides go on forever! All in an easy to fly package with a low 6.0 aspect ratio. A perfect C wing for those moving up from B. (Hammed Malik)

The X Alps performed impeccably during a 3-hour flight from Beechmont yesterday. Windy and gusty conditions but not a single collapse. A very solid glider gives a nice warning of decreasing pressure allowing time to provide corrective inputs. So far it has been no more demanding to fly than the Tenor Light including launching and full bar. I cannot comment on the collapse behaviour because I have not had one during the 5 hour demo period. (Thanks Martin). I will find out soon as I am buying and taking it to an SIV in a couple of weeks… (Daniel Fleming)

Here is the report for my SIV on the X Alps large (90-110kg) flown at about 100 kg. In short, marvellous. I had flown about 8 hours on it prior to the course and had had no significant collapses. It’s my first C glider so I was anxious about how It would behave when it did collapse. Very benignly is the answer. Frontals on the full bar were uneventful. Ditto for asymmetric. Weight shift and a tiny bit of brake allow for holding a straight course. Once established, I was able to lean into the collapse and perform a controlled 180. Ears are big and you only have two A-lines so they are always big. Big ears spiral gave a rapid decent rate but it was a bit more radical than Theo de Blic had led me to believe. That said I do not cope well with Gs so for others it may be fine. Search for a spin and flat spin were easy and benign with little inertia to deal with. 360 turn reversal took 29 secs and I lost a second correcting the pitch at the end as I was too keen to get it under 28. Search for stall gave a clear signal and time to recover. The stall was the easiest and least violent I have had with not much dive in the recovery. Wing overs were also easy to control when I finally got the timing right. I could not be happier with the wing so far both for XC and SIV. (Daniel Fleming)

PHI Allegro X-Alps was my first EN C wing. I had about 430 hours when I got it. Previously on NOVA ION 4, NOVA Phantom and PHI Tenor light. I could sometimes make a goal in comps on the Tenor but I wanted better into wind performance. I tried the xxxxx light and liked it but found it a bit too twitchy in normal flight for my taste. Nothing bad, just not what I like.  I then tried the allegro and immediately liked it and I liked the x alps even more because I like the benefits of a light wing. The move from the Tenor light to PHI Allegro X-Alps was a non-event. It felt like the same wing just faster with fewer collapses.Very happy with the performance. There are a lot of xxxxx wings at our club ( the designer, xxxxx is a xxxxx) so I glide regularly with them. I cannot see a difference between the performance of the xxxxx and the X-Alps and the xxxxx is considered a very high-performance C. PHI Allegro X-Alps provides plenty of feedback but no extraneous info. Generally good warnings of impending collapse and responses to active input to prevent them. If there is a collapse the Allegro X-Alps does not collapse much and it was my first C wing I was worried about what would happen when it went. I did an SIV on it and it behaved like the B wings I had previously SIV’d (NOVA ION 4, NOVA Phantom). No dramas at all. In the 70 hours I have on the two x alps, I have had one significant collapse in lee. Recovered well – no different to a B glider. Forward launching requires holding the A and the B lines for forward inflation. PHI Allegro X-Alps forwards easily in this configuration. Big ears are automatically big-big ears because there are only 2 A-lines. This is good for getting down but requires an active weight shift to control the yaw. (Daniel Fleming)

It is a straight forward and very clean design with the target to reach easy handling and good length stability.

PHI PROMISE GUARANTEE – 12 months Accidental Damage Protection
Your glider and our Promise. We do everything to ensure that you are fully enjoying your new PHI paraglider. In the annoying case of unintentional damage, your wing is comprehensively protected with PHI promise within the first year of usage. We will replace lines as required, change panels as necessary or glue small holes. We are restoring airworthiness. In case of irreparable damage, the current value of your wing will be deducted to a new PHI wing, according to prior agreement. Because quality and customer care are our main priorities. We mean it honestly with our promise. That’s why you won’t find any small print here.
https://phi-air.com/service/warranty/