Have you ever blacked out during a steep spiral dive before? Or, have you never had the courage to spiral so steeply? Well, whatever make of wing you fly, regardless of whether you have been spiralling too hard or not hard enough, the Anti-G will change your life – for the better. The Anti-G is a safety device that allows safer spiral descents by reducing G Force in a spiral dive. It is simple and easy to use, and is particularly effective for higher aspect ratio wings.

The Anti-G is fixed to the main attachment point of your harness on the side that you wish to spiral toward. Just deploy the chute, and begin your spiral dive as normal. Although you will be able to enter a steep spiral dive, you will make fewer turns while maintaining a higher sink rate and experiencing far less G-Force. Most pilots will experience a massive 40% reduction in G-Force while using the Anti-G. Using the Anti-G will allow you to reach a higher sink rate in your spiral with greater situational awareness due to decreased G-Force. Also, the reduction in G-Force means less strain on your wing and lines. With the Anti-G deployed in level flight, you will not feel a significant disturbance or yaw force on your harness at trim speed*.

You may descend in spiral and land as normal with the chute deployed. The Anti-G features a “kill line” to disable it easily in flight. We highly recommend this tool for all competition pilots whatever make of wing they fly; due to the high efficiency of some wings (like the Mantra and Mantra R series), it is difficult to descend effectively in spiral dive without excessive G-Force. The Anti-G allows for a very steep descent rate at low Gs for all brands of wings. If you are ordering an R11 then it is a good idea to order an Anti-G, too. 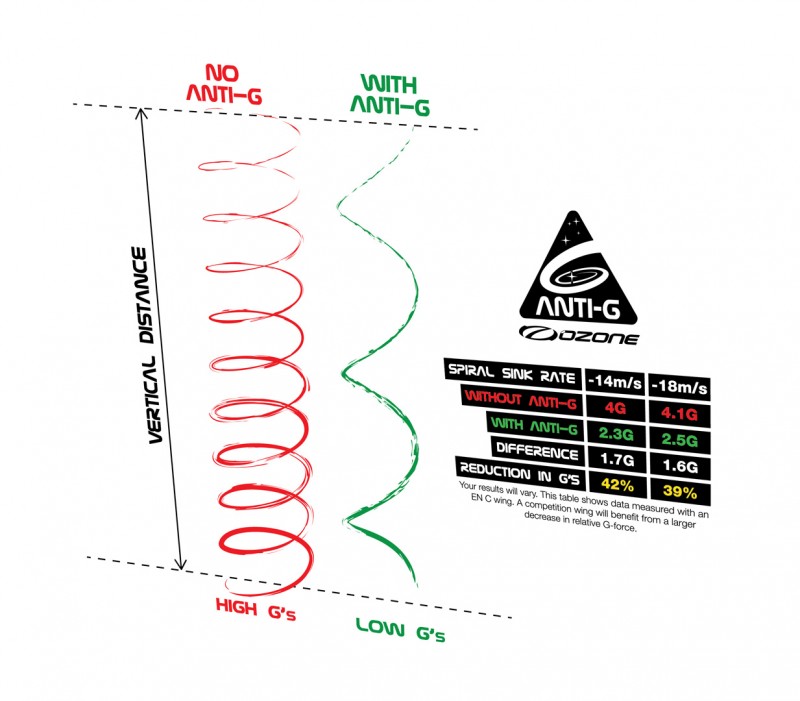 *The Anti-G is not to be used as a tool to land in a shorter than normal distance, it is intended only for use as a tool to decrease G-Force in a spiral.

Why is the Anti-G attached asymmetrically (on one side only)?

With the Anti-G deployed, is my wing closer to stall, collapse, or spin?

Because the Anti-G is attached to the carabiner, it is very close to the center of gravity of your system (wing + pilot). Therefore, it does not influence the pitch stability of your wing. To prove that point – if the Anti-G were positioned higher, for instance mid-way up your lines, it would exert a rearward force on the glider, giving it a stall tendency.

However, the Anti-G does add a very slight yaw asymmetry at trim speed, and a more noticeable asymmetry in accelerated flight.

Does my wing have the same behavior in spiral with the Anti-G?

Yes, all of our testing has shown that a wing’s behavior in spiral (stable or instable) does not change with the Anti-G added.

What about the Anti-G in straight and level flight?

The Anti-G serves no purpose in straight flight. With only 1.2m of surface area, it is too small to create significant drag at trim speed. For instance, it would not help you to land in a shorter distance – for such an application, the Anti-G is far less effective than the appropriate use of your brakes.

During a spiral, the Anti-G’s effectiveness is multiplied by a factor of 10 due to the increase in airspeed and the fact that drag is proportionate to speed. We do not recommend using the Anti-G as a landing approach tool, in addition to it being ineffective, it may also disturb your standard approach patterns.

Can the Anti-G be retracted and re-used in flight?

While it is possible to reuse the Anti-G multiple times during a flight, OZONE does not recommend it. If the pilot retracts the Anti-G in flight, there is a danger of sudden re-inflation in the relative airflow. If the Anti-G re-inflates close to the pilot, it may cause the parachute to obscure the pilot’s view or reduce the pilot’s capability to control his/her wing. We recommend that pilots use the Anti-G for one descent only, then disable it with the kill-line before landing. Each pilot must make his or her own decision as to what is safe and comfortable for them in each situation. You are responsible.

Can the Anti-G benefit the lifespan of my equipment?

Yes, because it greatly reduces the amount of G-Force. The number of Gs is directly proportional to the stress applied to the structure of your wing. Your wing suffers less loading when spiraled with the Anti-G.

What purpose does the shrink tab on the inside of the container serve?

This helps to keep the red stuff sack on the interior of the container in order to prevent it from inflating in the relative wind during flight and disturbing the pilot.

The container is too small!

Your Anti-G spends more time folded in your harness than it does inflated behind you, and for this reason it should take up the least amount of space possible in your harness. The container is designed to receive a properly folded Anti-G. Read the manual, and after one or two practice folds you will realize that it is very easy to put the Anti-G back into its container.

What side do I attach it to?

My Harness has a “drag chute” attachment point on the shoulder. Should I use that for the Anti-G?

No. We recommend that you attach the Anti-G to your carabiner as shown in the user manual only.

I tried to pull my Anti-G back on board and it re-inflated while I was trying to pull it in!

First of all, we don’t recommend that you do this. If you find yourself in a situation where it is mandatory to retrieve the Anti-G and store it for redeployment, then hold the webbing (bridle) firmly and if necessary kink it a little with your fingers to prevent the apex kill line from sliding inside the webbing.

While it is possible to reuse the Anti-G multiple times during a flight, OZONE does not recommend it. If the pilot retracts the Anti-G in flight, there is a danger of sudden re-inflation in the relative airflow. If the Anti-G re-inflates close to the pilot, it may cause the parachute to obscure the pilot’s view or reduce the pilot’s capability to control his/her wing. We recommend that pilots use the Anti-G for one descent only, then disable it with the kill-line before landing.